On the hill, next to the medieval church of picturesque Lid in Swedish Sörmland, is an old village school. Nowadays, artist Ann Edholm resides here. In the studio, the artist is working on her next major solo exhibition. Two paintings in Edholm’s usual format hang on the studio walls–gigantic canvases. In between, small paintings, which resume the imagery of the large ones–red, white and black with hard, jagged shapes. They are aggressive images that stand in stark contrast to the green, Sörmland hills beyond the studio walls.

–I've been quite upset. About ISIS and Russia and the progress of the Sweden Democrats. My mother is German and she is worried. A relative who was in Auschwitz always told her children "Never tell anyone that you are Jewish, because it can happen at any time again." And now, my mother says: "It started just like this, the mood was the same.” And then there is ISIS from the other direction. It's for real. 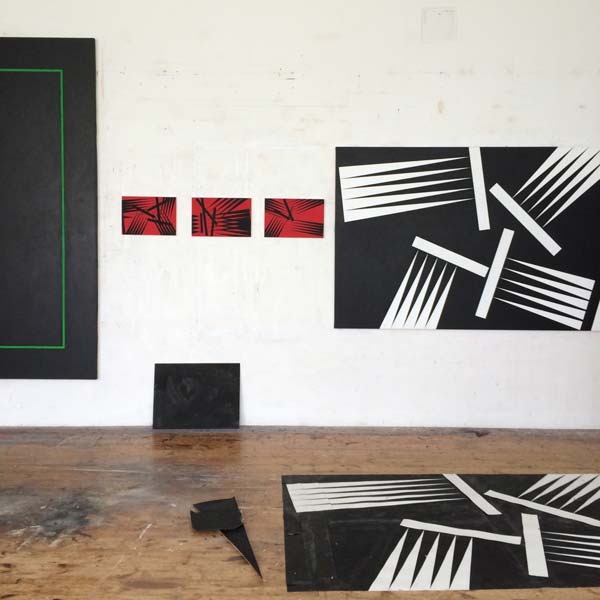 So, this drama is woven into the new works?

–At least that’s where it started. With the Guernica. That painting has interested me for a long time. The wedge that recurs in my new paintings come from Picasso, from the horse's tongue. In addition, Picasso made vaginas with teeth like this. I have used that breach as a starting point in earlier paintings too.

Just as in these latest paintings, the narrative is crucial in all of Ann Edholm's works, even though many would classify her as an abstract painter. Edholm herself emphasizes that she is not concerned with abstraction.

–The starting point of my work is a reality that I use because it describes a situation. Take the Guernica, for example. I base my work on it, and am using it to describe a reality or a feeling, in this case the war. Meanwhile, there is almost always a personal experience in the setting, too.

Ann Edholm takes the painting Kaddish as a further example. The painting consists of orange and black tongues of colour that intersect.

–Kaddish is a Jewish prayer of grief that is read as a call and a response. I connected it with the movement of a slap in the face, the beating on the one side and the resistance by the person who receives the blow on the other, slap slap slap, back and forth. I want both the personal experience and something universal to be present in my work.

But there shouldn’t be too much story-telling, right? You talk of working in the borderland between image and painting? What do you mean by that?

–When you stand at a certain distance from a painting you get a clear picture. But when you approach, it dissolves and becomes “just” painting. The challenge is to get it to dissolve without losing its sharpness, to remain in that ambivalence between the purely abstract and the story all. Because that is where it gets interesting.

Ann Edholm calls her smaller works "footnotes" to the bigger ones. When taking on a text, she often starts by looking at the footnotes, to see where the thoughts have been derived from. In the Jewish tradition, there is a deep respect for extensions, interpretation and re-interpretations that Ann Edholm reveres.

–In the Jewish, status quo is constantly questioned and the Holy Scriptures are reinterpreted. Any comments and notes that people have been writing in the synagogues are sacred. My small paintings function as those little notes where people write down their thoughts.

–My actual interest lies between the paintings, in the process. It is the transition from one work to the next that interests me, that's where you see the movement. Maybe that’s why I haven’t saved any of own paintings. In my storage, you’ll only find broken works.

Ann Edholm grew up in the nowadays fashionable Saltsjöbaden outside of Stockholm. The parents ran their blinds supplier company from the ground floor of the house on Skogsö, in a humble milieu where the neighbours still had outhouses. When the couple were out selling blinds, Ann Edholm lived with her grandparents in nearby Solsidan.

–My grandfather was a scientist, but he also painted a little. He taught me. I was interested and liked to draw. At school, I skipped French classes to be in the arts classroom, until my mother just had to accept it. Eventually, I got my own key so I could be there during weekends. The teacher told me that I should continue, and prepared a folder which he submitted to a preparatory school. I thought I would be accepted for evening classes, but made it to the daytime teaching.

But Ann Edholm experienced an insurmountable pressure when it came to painting, and became ill. She stopped painting and devoted herself instead to pottery. She started studying at the College of Arts, Craft and Design, but after a while she injured her hand. From there, she could slowly drift back to painting again.

–One morning I rode my bike to the College, stood outside and thought "they do not make art here." So, I turned my bike and never came back again.

After that, she studied at The Royal Institute of Art and immediately after graduation had an exhibition at the hyped Sten Eklund gallery. Ann Edholm had already made a small platform for herself in art Sweden. But it had not been easy.

–During the seventies, on the one hand there was colour and shape and constructivism. It was not supposed to mean anything; it was pure art, very masculine, no stories, no psychology. On the other hand, it was all political. There should be a maximum of story-telling, preferably about sailors and nurses and miners. Finding something impure in between was impossible. I felt that I couldn’t paint a family seated around the table for dinner. It just could not! It was only once I started making my surfaces “mumble”, or speak, loading the surface with a darkness; it was only then that I had found my own stance that worked. 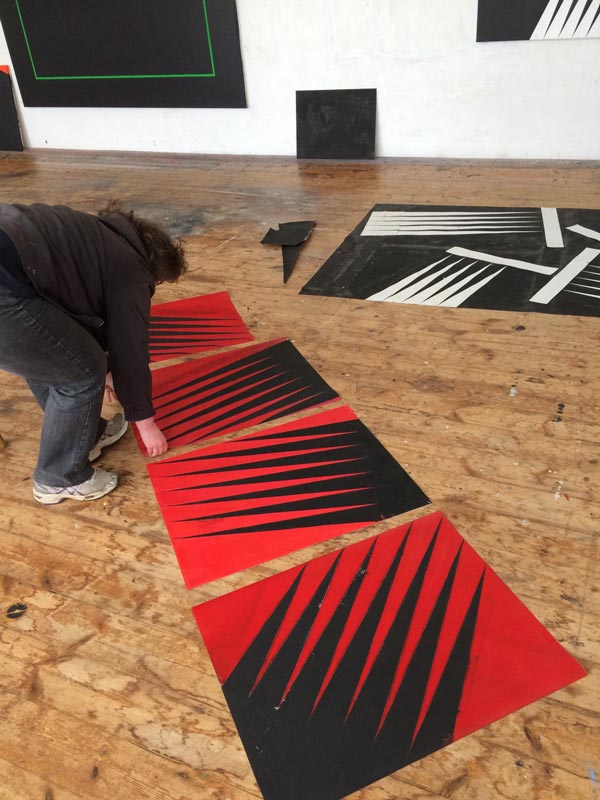 –I had a crisis during my time at the Royal Institute. I do from time to time (laughs). I wanted to quit, so I went to see my professor Olle Kåks and said that I wanted to take a break. He said that pauses were only to be had due to maternity leave or military service. But why didn’t I go to New York? Sure, why not? So, he fixed me a studio and I was there for six months. It was a very important period for me, I saw everything that I had missed.

The meeting with the American painter Barnett Newman became crucial.

–I was totally knocked out, standing in front of a Newman painting for the first time. There is a stature and a pride in them. The more I read, the more I understand. When people talk about it as abstract I get tired. It is what it is. Many of the signs that look like “just art” are Hebrew letters. He has been very important to me. Newman is not one of the macho expressionists. He helped women around him and had a political stance. He even wanted to stand for mayor.

Ann Edholm herself has been struggling with "macho expressionism". She has been criticized for taking up too much space, for taking herself too seriously, for being too macho, for being a woman painting in a masculine fashion, or for that matter for piggybacking on the men's domain and thus not being loyal to her sisters.

–But what should I do? Paint little flowers (laughs)? In young women of today I do not see any of this. They occupy the space they need. Back then, it hurt me, but I stood my ground. I had a good childhood and I could cope.

Maybe Ann Edholm also managed to cope since her personal pain has always had an outlet through the paintings. In the 90s, she became known as "the wound painter" during a period marked by great turbulence in her private life.

–All the wounds that I painted were due to a divorce that took seven years. It was one of those difficult, passionate stories where you want to be together but you cannot. The paintings were full of wounds. But in the end, I made a large blue painting with a big red shape that pulsates in the middle. That was the sign that things had healed. 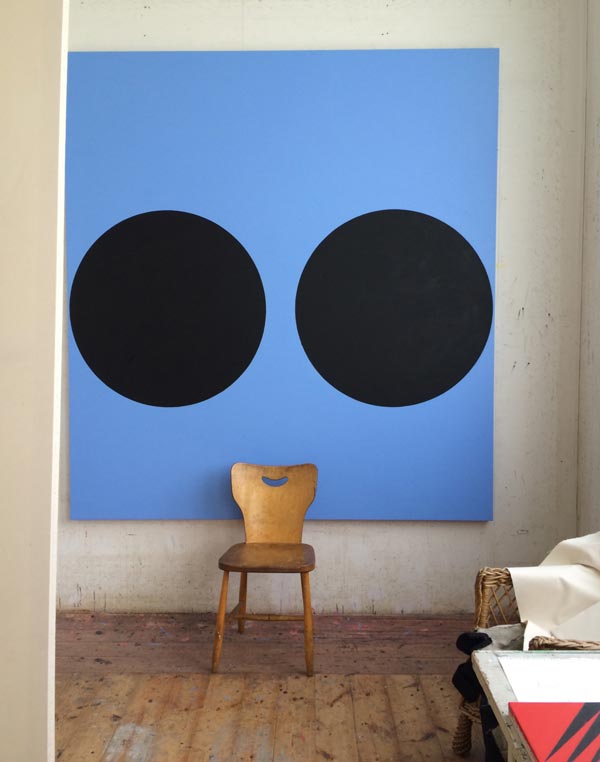 Despite the seriousness, there is also a sense of humour in your work. For example, the silhouette of Mickey Mouse has shown up in some works. People seem to have a hard time accepting that they are indeed Mickey Mouse, such "banal" elements in heavy, serious, abstract art?

–Everything in my art stems from Donald Duck (laughs)! Once I showed three Mickey paintings called Brottyta (Fracture). I thought of when Mickey goes through a wall and the silhouette remains. A woman came up and asked, "What is it?" "Don’t you see what it is?" I replied. "Nooo". I refused to speak, and we stood like that, finally I said "It's Mickey, don’t you see that?". "It cannot be Mickey. Not in oil paintings!"

The titles of Ann Edholm’s paintings have the same purpose. Without a title, the paintings don’t exist.

–It's a pretty big job, to see "who" painting is, as a subject. At best, the titles surface during the working process. But not always. There was this painting that was exhibited with a name that wasn’t any good and I didn’t like the painting, either. So, I took it home and worked on it. Then I got the title: The Kiss, which alludes partly to Munch's The Kiss but also to a Robert Longo painting with a kissing couple, the back of their heads turned into wolves. My painting is yellow and black, so it's not exactly a sweet kiss. The title was changed when the painting gave me that feeling. I know what I want to say to the paintings, then it’s a question of finding the right words. At best, a word pointing in different directions so it doesn’t lock the viewer into only one interpretation.

–Both Agnes Martin and Paul Klee talk of finding a title that creates the third, sculptural room, a room between the painting and the viewer. That's what I want.

Do you ever think about where your paintings end up?

–No, then I don’t think I would have kept going.

But in your work, don’t you ponder who will be meeting the paintings? Or is your starting point only yourself?

–Well, I trust myself (laughs). I guess I think of myself as a human being after all…